The Owl Keeper by Christine Brodien-Jones 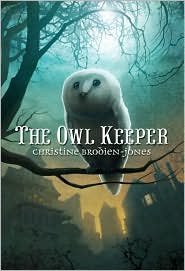 BOOK DESCRIPTION: Maxwell Unger has always loved the night. He used to do brave things like go tramping through the forest with his gran after dark. He loved the stories she told him about the world before the Destruction—about nature, and books, and the silver owls. His favorite story, though, was about the Owl Keeper.
According to Max’s gran, in times of darkness the Owl Keeper would appear to unite owls and sages against the powers of the dark. Gran is gone now, and so are her stories of how the world used to be. Max is no longer brave. The forest is dangerous, the books Gran had saved have been destroyed, and the silver owls are extinct. At least that’s what the High Echelon says. But Max knows better.

Maxwell Unger has a secret. And when a mysterious girl comes to town, he might just have to start being brave again.

The time of the Owl Keeper, Gran would say, is coming soon.


OUR REVIEW: Fantasy fans will love this middle grade novel. We did. The beginning was a bit slow moving for us but once the story picked up and Max's conflict was introduced, we couldn't stop reading. Brodien-Jones has created a wonderfully eerie world in which Max lives with the High Echelon watching and keeping control of all its residents. Set in 2066, Max's parents work in a government factory making chocolate. They work long hours and see Max only at dinner. With his condition (an aversion to sunlight which could kill him if exposed), he lives a sheltered life, remaining indoors all day and roaming the woods by his house at night. When the story begins he meets a strange red-haired girl named Rose by his Owl Tree where he believes the last remaining silver owl lives. Each night Max goes out to see his owl and talk with his new friend. But the High Echelon has spies and soon Max's caretaker, Mrs. Crumlin, is asking him questions, and the doctor arrives to give him his special shots. What Max overhears makes him begin to suspect the very things  he was raised to believe in.


Without spoiling the story we will simply say THE OWL KEEPER is a terrific debut novel. The author has created a dark, futuristic tale of a society where everyone has to think alike and those who question or rebel are punished. Magic and a six hundred year old prophecy motivate the evil doers into searching for and controlling any person who is different (or is born with a birthmark declaring them Night Seers).


We really enjoyed the history of the silver owls and the role of the mysterious Owl Keeper, as well as the locales and settings Max and Rose travel to. We felt we were there traveling with them through scary woods and ice covered fortresses. With lush details it was easy to picture the scenes and situations the hero and heroine faced with. This is a highly spirited tale, very creative with strange creatures and the beauty of the delicate owls who hold the power to protect those who inhabit the lands of Silvern with their OwlSong. We anticipate loving the next installment in this series as well.


"The owls slowly drifted to the ground. Their wings touched and overlapped, brushing one another like light through light. Max imagined he could hear their tiny hearts, beating rapidly. Then, with amazed delight, he saw his very own owl, flying alongside the others, her feathers shimmering with an ethereal light.


In a world of extreme darkness, he knew he had found his way. The Owl Keeper was here, in this mysterious frozen city. He sighed with happiness and relief, thinking: we don't belong to this earth anymore, Rose and I--we've been touched by the silver owls and we'll never be the same."


COVER COMMENT: Adorable. The cover picture truly captured the essence of this story.


SERIES: We believe so.


FOR FANS OF: Contemporary, futuristic fantasy.


REVIEWED BY: Caitlin and Laurie

Title:  "Love Notes": Four Musical Romance Novels Release date:  February 2nd 2015 Purchases:   Amazon SYNOPSIS VIA  GOODREADS : Pieces of Me  by Kira Adams For sixteen year old Peyton Lane, life has never been easy. She's not popular, overweight, and oh yeah, her sister is embarrassed of her. But over the course of a tumultuous year, everything changes for Peyton. Suddenly all eyes are on her and it's not because she's fat. From a pair of handsome twins to a couple of dangerously sexy rockers, Peyton will have to find out who she can trust with her heart. From the ups and downs to the twists and turns -- this is Peyton's story of finding one's voice and growing into your own. This is a coming of age romance that involves realistic situations and raw emotions.  This is Pieces of Me. Pre-order Love Notes
Read more

Teaser Tuesdays is a weekly meme hosted by Miz B at  ShouldBeReading   where you randomly take two lines from your current read (spoiler-free please) and highlight them in a  post. We are featuring three YA novels this week. First up:  Jessica Rules the Dark Side by Beth Fantaskey. "Glancing over my shoulder, I considered testing whether I could return that way--then decided I wasn't going to start this journey by turning back, I was done with looking back." Blurb: The highly anticipated sequel to Jessica’s Guide to Dating on the Dark Side . It’s one thing to find out you’re a vampire princess. It’s a whole other thing to actually rule. Newly married Jessica Packwood is having a hard enough time feeling regal with her husband, Lucius, at her side. But when evidence in the murder of a powerful elder points to Lucius, sending him into solitary confinement, Jessica is suddenly on her own. Determined to clear her husband’s name, Jessica launches into a ful
Read more